A WELL-ROUNDED PHOTOGRAPHER, Ammar Abd Rabbo has covered, over the past 25 years, anything from catwalks to military parades, and back, from political leaders to ordinary citizens taking them on. Throughout his career, he has opted for provocative, uncompromising views: condemning the esthetics of misery rewarded by photography prizes; embracing unapologetically the Syrian uprising, which he photographed for all its magnetism and with all its warts; and pushing hard against all barriers to visual representation in the Arab world, through artistic exhibitions tackling such issues as cults of personality or taboos pertaining to the female body. His thoughtful and introspective photography has much to say about the region’s “graphic identity,” and thus how it portrays itself and is perceived by outsiders.

Ammar, to what extent have politics and conflict shaped the use of photography in the Arab world over the decades?

Photography originally was introduced to the Arab world by European orientalists, and then adopted as a hobby by local aristocrats. The first Arab photographers can be traced to the middle of 19th century, but the bulk of pictures that form our vision of the modern Arab world were taken by photographers embedded in colonial forces and reporters deployed by foreign press agencies. The regimes that took power in the 50s and 60s started using pictures for propaganda reminiscent of Stalinism—personality cults, the aesthetics of model societies, and so on.

The emergence of an Arab press photography, offering a real alternative, occurred only belatedly, in the late 1970s, with the Lebanese civil war. Local photographers proved indispensable to cover a particularly fragmented conflict, and the militias themselves sought to document their successes. A modern “martyrology” appeared using portraits and scenes taken on the frontlines. The Palestinian Intifadas, the 2003 US invasion of Iraq and the uprisings that swept the Arab world as of 2011 favored the emergence of a whole new generation of Arab press photographers. Due to deteriorating security conditions, locals were trained and equipped in large numbers to produce the images needed to feed global media.

So photography in the Arab world is intrinsically political. If you ask children in Europe to recall photos they have seen, they’ll mention advertising and then family pictures. Here they’ll mention their president, perhaps some conflict imagery, and finally commercials.

Part of why photography is so political comes from all the constraints that have long made it difficult to photograph these societies normally. In Tunisia under Ben Ali, you weren’t allowed to show veiled women. In Mubarak’s Egypt, photographers were arrested for broaching the topic of genital mutilations, although it concerned most women there. In Syria before 2011, you couldn’t take pictures of desperate poverty, religious symbols, or even high-end neighborhoods, where officials resided. So, you’d end up framing people reading newspapers in a café, say, because that’s all the regime would let you say about society.

In most places around the world, a photographer seeks the “ideal photo” that fits their artistic vision, or the “profitable photo” that meets the market’s standards. In this region, you tend to go for the “doable photo,” namely what’s left when all the political, religious, social and sexual taboos are done censoring the rest.

That has been changing, of course, since 2011, with the breakdown of order and the multiplication of smartphones, which mean that every Arab has become both a photographer and a distributor. Images used to challenge political icons have become more banal, as in the photo above—which captured a gesture unthinkable prior to the uprisings. People now picture what they see and publicize it, for better or worse: from shooting their own crimes to showing their society unfiltered.

How do you explain that photography—which at its inception was believed to be so truthful as to literally capture the soul of the people it pictured—now evokes as much distrust as any other medium?

“The camera doesn’t lie,” goes the saying. But that is a lie in itself. Images have long been manipulated, to the extent that Western countries in the 1980s began setting out legal frameworks to roll back widespread abuse. In a sense, a more cautious and discerning response to photography is the sign of a maturing public, which doesn’t take things for granted. As a matter of principle, that is a good thing.

But today we are going overboard, distrusting everything obsessively. Part of the problem comes from access to technology: virtually anyone can Photoshop an image, circulate pictures taken out of their context and so on. Images from Gaza will be used to talk about Syria or vice versa. The portrait to the right, for example, is a conservative Syrian woman who took arms in Aleppo, which served to illustrate all sorts of articles on female foreign fighters in Raqqa or Mosul… The public is partly to blame, because it is all too keen to buy into whatever supports its biases. We’ve ended up in a very paradoxical situation, where virtually any picture can grab people’s imagination if only it is pitched as “unseen on mainstream media.” Whole websites now function on the basis that mainstream media supposedly lie, staking a claim to circulating more authentic material—which usually is fabricated. They prove that the media lie by lying themselves, and their lies catch on nonetheless. That’s how you get pictures from the Arba’in pilgrimage in Iraq repackaged as “the 30 million Muslims demonstrating against the Islamic State that mainstream media didn’t want you to hear about.” It’s a vicious circle that further undermines trust.

We’ve reached a point where people tell me “I can’t believe anything anymore…” That doesn’t make sense either. A balance must and can be found. With modern technology, it has become extremely easy to trace an image’s origins and misuses. There are also basic rules that people should familiarize themselves with, as they produce and consume imagery. A picture is valueless without a date and a caption, both of which can be verified. Contextualization is key. And there are red lines not to cross, such as removing any component of a picture. This is where visual education, in schools, via social media or on television, would be an obvious tool.

Why does an image bring into play a certain “visual education” that will determine the way it is perceived by the viewer?

A picture draws on a broader cultural context, which puts it into perspective. A photograph may, for example, hint at all sorts of cultural frames of reference: great artistic movements; the personal styles of famed artists and photographers; religious and cinematographic iconography; and so forth. This backdrop contributes a lot of meaning to the image. The viewer’s ability to detect these influences and use them as interpretative tools is what I call “visual education.”

Our relationship to our visual environment is something that we build over time, starting in childhood. European children will critically discuss photos and artwork at school, and visit museums and exhibitions. They develop a sensitivity to various styles. They naturally associate black and white photography, for instance, with higher quality—when Arab viewers do the opposite. The visual environment itself is shaped by the public it caters for. Advertising will be more sophisticated in a place where the target audience is visually educated, and more literal elsewhere.

Photography is a medium that can connect very directly to people, who may feel enthused, revolted or otherwise touched, regardless of their level of visual education. But the exact nature of their reactions will be very different depending on it. Some people perceived the American soldier in this photo as a symbol of arrogance, bringing out extraordinarily aggressive feelings in them; others were struck first and foremost by his diminutive size—a human speck lost in the magnitude of events, insignificant in the greater scheme of Iraq’s history and civilization. 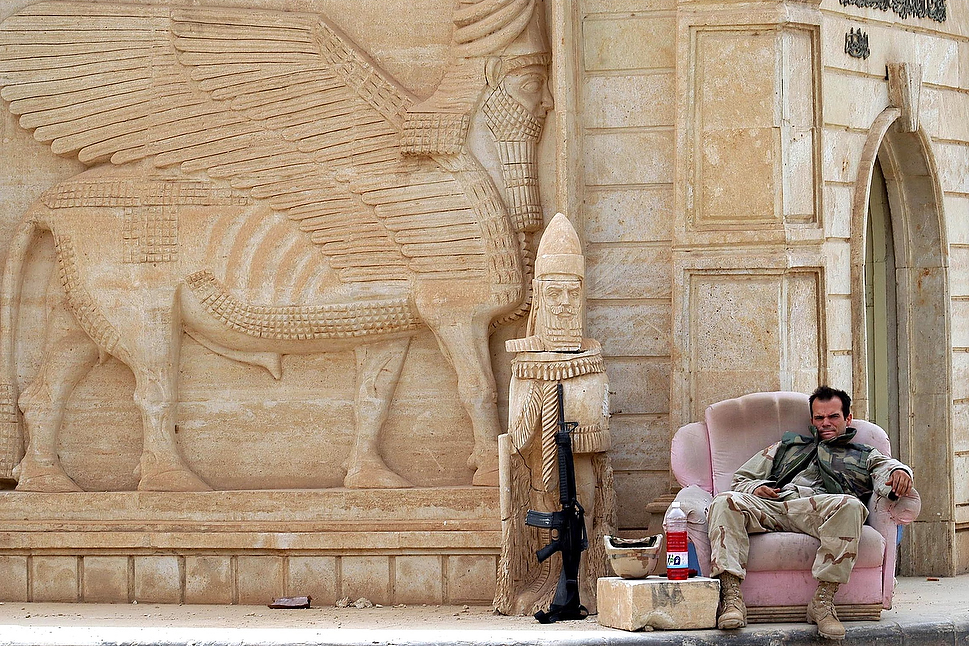 These variances may have a cultural, geographical basis. People in different settings display distinct pictorial “aspirations.” In a pacified European environment, raw violence, for example, is a no go. In the Arab world, which is instilled with all sorts of violence, people expect it, as if they were saying “this is what we are going through, and this is what must be shown”—even if it entails dislocated body parts and dead babies. In Aleppo, for example, Syrian photographers could not understand why the pictures that best captured what they were going through were completely unsellable on a Western market.

There is, generally speaking, a more literal rapport to photography in the Arab region than in Western circles. Arab newspapers, most of which don’t even have an official photo editor, typically publish images that simply repeat what is said in the text. Pictures are not seen as having more than a basic illustrative value, which is reflected in how often they are used with no respect for copyright, context and captions… In Europe, publications invest in graphic design and sport ambitious visual policies. A photo tends to add something and speak for itself. Many cover photos are chosen precisely for their unique expressiveness, rather than their direct relationship to a given headline.

The issue of lagging visual education in the Arab world is important in at least two respects. On one hand, perceptions of the region are deeply influenced by the flood of imagery that emanates from it, which occupies a disproportionate space in global media while often contributing to reductive perceptions.  Many prizes go to powerful pictures from the area, but the region must play a much more active role in portraying itself on its own terms. For now the Arab world is largely underequipped: we don’t understand visual representation enough to produce and disseminate imagery that suits us.

On the other hand, in the absence of a solid visual education, people are more susceptible to manipulation. They fail to deconstruct and question a picture, rather dismissing it or, on the contrary, taking it at face value. This is something the so-called “Islamic State” (or Daesh) turned to its advantage. It developed sophisticated visual products that were quite effective on people with limited ability to interpret them.

Enjoy the occasional, thoughtful boost to your output! And read our other interviews with professionals we look up to!